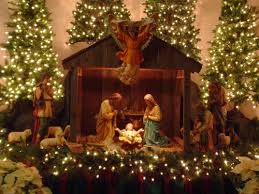 The first Christmas I spent away from my family I spent in Dublin. I was introduced to new delights such as mince pies, mulled wine and the fact that what I call a creche, is a crib here.

I had found the fact that my niece went to a “creche” in the afternoons a bit odd. A creche is a nativity scene you put up at Christmas time, right? Do you mean my niece goes to a daycare? Yes. Oh, ok. Daycare=creche. A few months later, as Christmas neared, I asked if a nativity scene was called a creche too.

No. It’s not. The Irish call it a crib. But doesn’t a baby sleep in a crib? No.  A baby sleeps in a cot. Isn’t a cot  a camp bed, or smaller bed used in hotels for an extra child? No.

In Ireland a crib is a nativity scene. A child goes to a creche to be cared for by adults other than his/her parents, and will sleep in a cot until at least two years old.

In America a baby sleeps in a crib, summer campers or an extra child will sleep in a cot, and the baby Jesus–with assorted animals, wise men and shepherds–can be found in a creche at Christmas time.

Happy Christmas One and All! 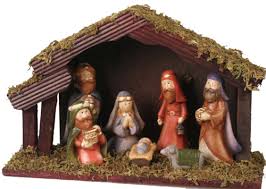